However, FPGAs are not yet available at scale to general cloud users who want to accelerate their own workload processing. This puts the cloud deployment of compute-intensive workloads at a disadvantage compared with on-site infrastructure installations, where the performance and energy efficiency of FPGAs are increasingly being exploited.

cloudFPGA solves this issue by offering FPGAs as an IaaS resource to cloud users. Using the cloudFPGA system, users can rent FPGAs — similarly to renting VMs in the cloud — thus paving the way for large-scale utilization of FPGAs in DCs.

The cloudFPGA system is built on three main pillars:

(1) Changing the traditional way of attaching an FPGA to a CPU by moving from PCIe attachment to network attachment.

(2) Promoting the FPGAs to the rank of remote peer processors by disaggregating them from the servers and provisioning them as independent and self-managed resources in the cloud.

The network attachment sets the FPGA free from the traditional CPU–FPGA attachment by connecting the FPGA directly to the DC network. As a result, the number of distributed FPGAs becomes independent of the number of servers.

To enable cloud users to rent, use and release large numbers of FPGAs on the cloud, the FPGA resource must become plentiful in DCs.

The cloudFPGA infrastructure is the key enabler of such a large-scale deployment of FPGAs in DCs. It was designed from the ground up to provide the world’s highest-density and most energy-efficient rack unit of FPGAs.

The infrastructure combines a passive and an active water-cooling approach to pack 64 FPGAs into one 19"×2U chassis. Such a chassis is made up of two Sleds, each with 32 FPGAs and one 64-port 10GbE Ethernet switch providing 640 Gb/s bi-sectional bandwidth.

Today, the prevailing way to incorporate an FPGA into a server is to connect it to the CPU over a high-speed, point-to-point interconnect such as the PCIe bus, and to treat that FPGA resource as a co-processor worker under the control of the server CPU.

However, because of this master–slave programming paradigm, such an FPGA is typically integrated in the cloud only as an option of the primary host compute resource to which it belongs. As a result, bus-attached FPGAs are usually made available in the cloud indirectly via Virtual Machines (VMs) or Containers.

In our deployment, in contrast, a stand-alone, network-attached FPGA can be requested independently of a host via the cloudFPGA Resource Manager (cFRM, see figure). The cFRM provides a RESTful (Representational State Transfer) API (Application Program Interface) for integration in the Data Center (DC) management stack (e.g. OpenStack).

Cloud integration is the process of making a resource available in the cloud. In the case of cloudFPGA, this process is done by the combination of three levels of management (see Figure): A cloudFPGA Resource Manager (cFRM), a cloudFPGA Sled Manager (cFSM), and an cloudFPGA Manager Core (cFMC).

In the end, the components of all levels work together to provide the requested FPGA resources in a fast and secure way. 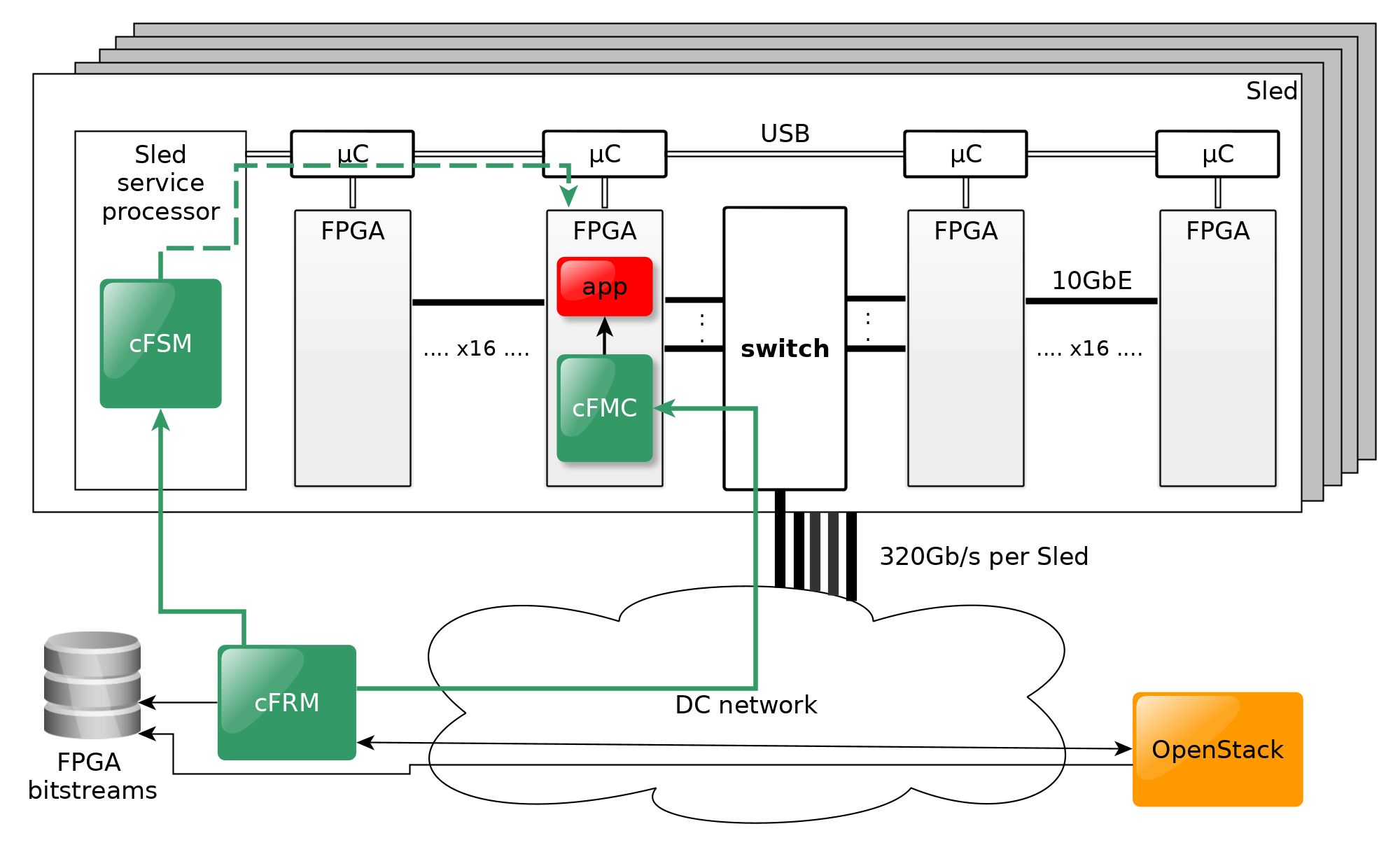 System architecture for the cloudFPGA platform. 32 FPGAs, one switch and a service processor are combined on one carrier board and called Sled. The management tasks are split into three levels — cloudFPGA Resource Manager (cFRM), cloudFPGA Sled Manager (cFSM), and cloudFPGA Manager Core (cFMC). A Sled is half of a 2U chassis. The OpenStack compute resources (Nova) CPU nodes are also available for creating heterogeneous clusters.