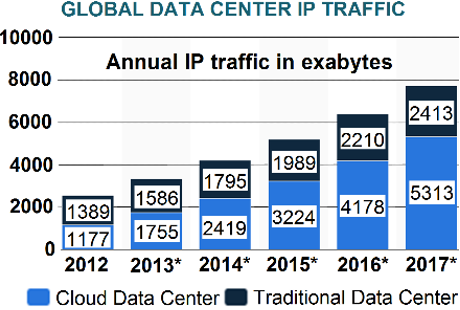 Various trends such as the shift to mobile applications, the Internet of Things and cloud computing imply a tremendous growth in internet data traffic. This will result in steadily increasing performance requirements on cloud data centers.

As illustrated in Fig. 1, Big Data, and social media will further drive the issue of data-center performance [1].

We are observing a similar trend for high-performance computers (HPC). For example, the performance of the most powerful supercomputers on the TOP500 list [2] has increased by a factor of 10 every four years over the past 20 years, see Fig. 2.

In keeping with this trend, the first exaflop supercomputers are expected on the market by 2020. Their performance will be some 10 times higher than that of today’s fastest supercomputer, which provides 93 petaflops/s.

To meet the projected performance requirements of future data centers and HPCs [3,4], the communication bandwidth needs to scale at all levels of the system, i.e., exponentially.

Today’s computer systems are largely based on multimode optical link technology at a VCSEL wavelength of 850 nm. To increase the “bandwidth length” product of optical interconnects in future high-performance systems, single-mode technology is becoming increasingly attractive. The emergence of silicon (Si) photonics is supporting this trend.

To meet system-cost and power constraints, a high level of integration will be required, which in our view can be achieved with the following two technologies:

Si photonics is an emerging integrated-optics technology platform based on an SOI structure, in which a wide variety of optical and electro-optical functions can be densely integrated. Optical PCB technology is an extension of established electrical PCB technology with optical signal distribution capability.