“Future super­com­put­ers will be based on tech­nol­ogy class­es that work with the tini­est of sys­tems: Wear­ables and IoT de­vices.”

In this project, we focus on integrating individual computers for wearable / Internet of Things (IoT) applications and for edge computers.

Our main focus is on vertical integration, starting from sensor technologies and energy harvesting to data acquisition and energy provisioning to data analytics and machine learning.

The computer industry has gone through several phases characterized by different computer classes: Mainframes, then PCs, mobile phones and—most recently—wearables and IoT devices. All these computer classes emerged and grew, but they were subsequently replaced by the next generation of computers [1].

This trend also applies to the technology classes on which computers are based: A new technology class differs from its predecessors by serving an overall addressable market that is 10 times larger than the previous one, and by achieving 100 times the density and efficiency at 1/100th of the former cost.

This is why future supercomputers will be based on technology classes that work with the tiniest of systems: Wearables and IoT devices. Owing to the larger addressable market, these devices will mature faster than former technologies and eventually replace them.

Smart systems include sensing and intelligence that understands a situation. They will make predictive and adaptive data-driven decisions and perform smart actions. The cognitive intelligence of such systems is built on energy-efficient autonomous operation, closed-loop control and communication functionalities.

A major challenge is the integration of many diverse components that combine different technologies and materials. The focus is on services for particular applications, for example in the healthcare and automotive sectors.

The term “smart” reflects the embedded processing capability as well as the full awareness of the environment that becomes possible with the introduction of sensing capabilities, thus bringing together interdisciplinary technologies and solutions. 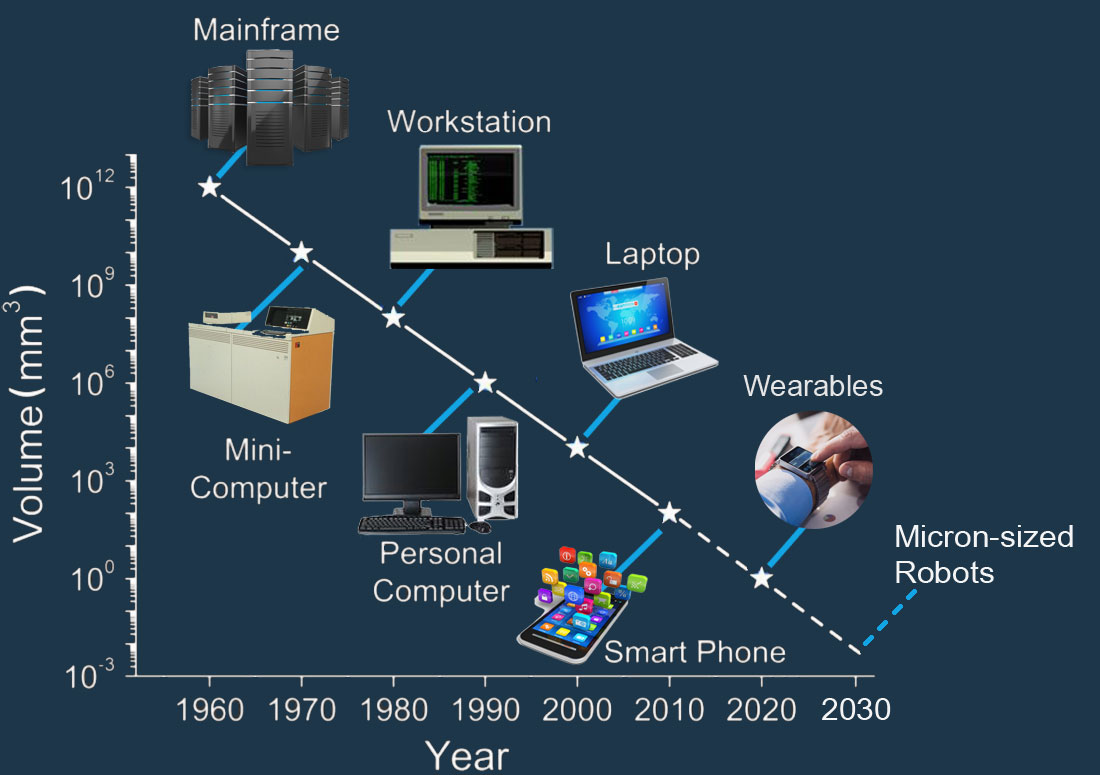 Development of computers from mainframes to millimeter-scale sensors, IoT devices and wearables.

Today, only few of the required behavioral indicators are available to cognitive engines.

To acquire this data, we need smart interfaces to “access humans”, the largest data source.

Personalized cognitive services will be relevant in many current and future markets, which represent a total market of several hundred billion $US, e.g.–health, workforce of the future, education, advertising, travel, media and communication.

We also need the right tools. A framework for better understanding and modeling human behavior by complementing global with local human context allows cognitive systems to operate in a more accurate and context-relevant manner.

A context for much better digital access to humans reduces the perception of an interface between computers and humans and allows more digitally enabled services.

Wearable devices enable many new experiences and digital business opportunities, but a fragmented landscape is a challenge to developers.

There is an opportunity for an integrator to provide an umbrella over the fragmented landscape and quickly drive the field to maturity so that it can deliver the promises made.

These concepts are well summarized and discussed in the recent IBM Research blog article “Of Big Brains and Tiny Devices: Here Comes the Internet of the Body” by B. Michel.

Physical integration is very important for wearables and IoT devices.