Nanoscale thermal phenomena are explored for applications in nanoelectronics and energy conversion. These include conventional and unconventional nanoscale devices, neuromorphic devices, molecular electronics and thermoelectricity. We aim to explore the engineering and physics of thermal processes at the nanoscale need to be explored in detail to take full advantage of the rich phenomena and to design thermal devices. The metrology associated with thermal transport at the nanoscale requires sophisticated tools and methods. Our experimental setups benefit from an optimal lab environment inside IBM’s noisefree labs. 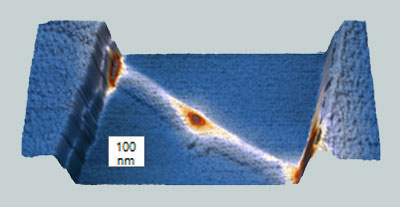 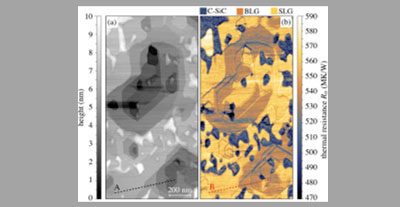 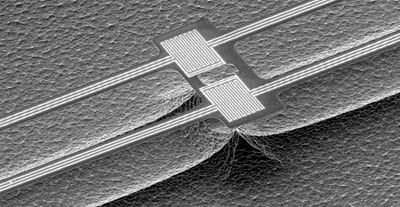 Imaging temperature fields at the nanoscale is a central challenge in various areas of science and technology. Nanoscopic hot spots, such as those observed in integrated circuits or plasmonic nanostructures, can locally modify the properties of matter, govern physical processes, and activate chemical reactions.

Specifically, future transistors are expected to be subject to serious self-heating problems. In these devices, heat has to be dissipated across many interfaces of dissimilar materials, such as semiconductors, metals and oxides. As thermal impedance mismatches between adjacent materials and confined geometries (thin films, nanowires) limit thermal transport, device-level thermal design has become necessary.

We have developed temperature mapping techniques based on scanning thermal microscopy to measure the self-heating of nanodevices with resolutions in the nanometer regime.

At the nanoscale, heat transport is strongly influenced by boundaries, interfaces and contacts. Nanostructured and molecular materials have specific thermal transport properties, which can be tuned for various applications. We study thermal conductance through nanoscale mechanical contacts, through molecules or vacuum gaps using scanning thermal microscopy, and through nanowire devices using MEMS-based sensors.
[ More ]

Heat transport and dissipation at the nanoscale severely limit the scaling of high-performance electronic devices and circuits. Metallic atomic junctions serve as model systems to probe electrical and thermal transport down to the atomic level as well as quantum effects that occur in one-dimensional (1D) systems. We report heat-transfer measurements through atomic junctions and analyse the thermal conductance of single-atom gold contacts at room temperature. Simultaneous measurements of charge and heat transport reveal the proportionality of electrical and thermal conductance, quantized with the respective conductance quanta. This constitutes a verification of the Wiedemann–Franz law at the atomic scale.

We use MEMS-based sensors to measure the thermal transport through micro-and nanoscale materials such as nanowires, nanotubes or micro-ribbons.
[ More ]

Precise measurements of a complete set of thermoelectric parameters on a single indium-arsenide nanowire (NW) have been performed using highly sensitive, micro-fabricated sensing devices based on the heater/sensor principle.

Weyl semimetals are materials where electrons behave effectively as a kind of massless relativistic particles known as Weyl fermions. These particles occur in two flavors, or chiralities, and are subject to quantum anomalies, the breaking of a conservation law by quantum fluctuations. For instance, the number of Weyl fermions of each chirality is not independently conserved in parallel electric and magnetic field, a phenomenon known as the chiral anomaly. In addition, an underlying curved spacetime provides a distinct contribution to a chiral imbalance, an effect known as the mixed axial-gravitational anomaly, which remains experimentally elusive. However, the presence of a mixed gauge-gravitational anomaly has recently been tied to thermoelectrical transport in a magnetic field, even in flat spacetime, opening the door to experimentally probe such type of anomalies in Weyl semimetals. Using a temperature gradient, we experimentally observe a positive longitudinal magnetothermoelectric conductance (PMTC) in the Weyl semimetal NbP for collinear temperature gradients and magnetic fields (rT kB) that vanishes in the ultra quantum limit. This observation is consistent with the presence of a mixed axial-gravitational anomaly.
[ More ]

Using a temperature gradient, we observe experimentally a positive magneto-thermoelectric conductance in the Weyl semimetal niobium phosphide (NbP) for collinear temperature gradients and magnetic fields that vanishes in the ultra-quantum limit, when only a single Landau level is occupied. This observation is consistent with the presence of a mixed axial–gravitational anomaly, providing clear evidence for a theoretical concept that has so far eluded experimental detection.

Transport at the Planckian bound of dissipation

We observed signatures of hydrodynamic electron flow in the Weyl semimetal tungsten diphosphide (WP2). Using thermal and magneto-electric transport experiments, we find indications of the transition from a conventional metallic state at higher temperatures to a hydrodynamic electron fluid below 20 K. The hydrodynamic regime is characterized by a viscosity-induced dependence of the electrical resistivity on the square of the channel width and by a strong violation of the Wiedemann–Franz law. From magneto-hydrodynamic experiments and complementary Hall measurements, the relaxation times for momentum relaxing and conserving processes are extracted. Following the uncertainty principle, both electrical and thermal transport are limited by the Planckian bound of dissipation, independent of the underlying transport regime.
[ More ]

Materials with strongly-correlated electrons exhibit interesting phenomena such as metal-insulator transitions and high-temperature superconductivity. In stark contrast to ordinary metals, electron transport in these materials is thought to resemble the flow of viscous fluids. Despite their differences, it is predicted that transport in both, conventional and correlated materials, is fundamentally limited by the uncertainty principle applied to energy dissipation. We discover hydrodynamic electron flow in the Weyl-semimetal tungsten phosphide (WP2). Using thermal and magneto-electric transport experiments, we observe the transition from a conventional metallic state, at higher temperatures, to a hydrodynamic electron fluid below 20 K. The hydrodynamic regime is characterized by a viscosity-induced dependence of the electrical resistivity on the square of the channel width, and by the observation of a strong violation of the Wiedemann-Franz law. From magneto-hydrodynamic experiments and complementary Hall measurements, the relaxation times for momentum and thermal energy dissipating processes are extracted. Following the uncertainty principle, both are limited by the Planckian bound of dissipation, independent of the underlying transport regime. 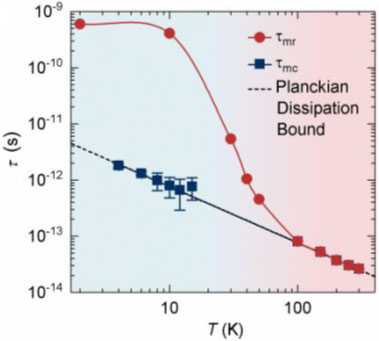 Hot spots with dimensions of only a few nanometers form in numerous nanoelectronic devices. Based on recent advances in spatial resolution, these hotspots can now be studied by means of Scanning Thermal Microscopy (SThM). Here, we discuss SThM for nanoscale thermometry in comparison with other established thermometry techniques. In situ measurements of semiconductor channels for logic, and phase change memory devices are used to demonstrate today’s measurement capabilities. Temperature fields characterize not only energy dissipation in intact devices but can also serve to identify device failure and fabrication issues.
[ More ]